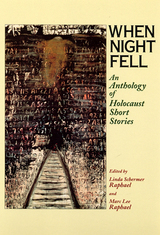 Both survivors of the Holocaust and those who were not there agree that it is impossible to tell what happened as the Nazi Final Solution was put into effect. No writing can adequately imagine the concentration camps, ghettos, and death camps. And that is precisely why writers must tell-and retell-what happened there.

In When Night Fell: An Anthology of Holocaust Short Stories, Linda Schermer Raphael and Marc Lee Raphael have collected twenty-six short stories that tell of the human toll of the Holocaust on those who survived its horrors, as well as later generations touched by its memory. The stories are framed by discussion of the current debate about who owns the Holocaust and who is entitled to speak about it.

Some of the stories included here are by internationally acclaimed authors. Others may be new to many readers. When Night Fell is a fitting memorial to this genocidal horror, putting eloquent voice to human endurance that is-almost-beyond words.

Linda Schermer Raphael teaches English at George Washington University in Washington, D.C. She recieved her Ph.D. degree in literature from Ohio State University. Her writings have focused on nineteenth- and twentieth- century literature, narrative theory, and moral skeptics in fiction.

Marc Lee Raphael is Nathan and Sophia Gumenick Professor of Judaic Studies and Professor of Religion at the College of William and Mary. He recieved his Ph.D. degree in history from the University of California, Los Angeles. He has served as cochair of the teaching Training Committee of the Ohio Council on Holocaust Education and has taught university courses on the subject since 1976.

REVIEWS
"This important anthology sheds much light on the aesthetic and moral role of writers in representing the Shoah. By including both survivors and non-witnessing authors in their study, the Raphaels emphasize the universal and ongoing nature of this crucial issue."
— Alan L. Berger, author, Children of Job: American Second-Generation Witnesses to the Holocaust

"The Raphaels have gathered for us--teachers, students, readers--a collection of short stories built on silence: from the unspeakable events of the Holocaust through the profound silence of history to the decorous silence of racism and probity. 'The story [of the Holocaust] is never-ending,' says the introduction. Without this book we'd know less than we must know to stay alive."
— Hilda Raz, editor, The Prairie Schooner Anthology of Contemporary Jewish American Writing