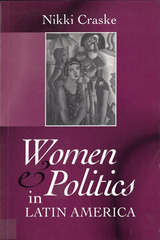 This book provides a comprehensive view of women's political participation in Latin America. Focusing on the latter half of the twentieth century, it examines five different arenas of action and debate: political institutions, workplaces, social movements, revolutions, and feminisms. Nikki Craske explores the ways in which women have become more effective in the public arena as the context of politics has altered.

Craske demonstrates how gender relations shape political institutions and practices while simultaneously being shaped by them. She examines the moments when women's action has challenged received ideas, and had a significant impact on the political life of Latin American nations. Women remain heavily underrepresented in political lie, despite their important role in popular movements against authoritarianism, Craske states, and posits that the economy is a substantial constraint on women's political participation. This powerful book analyzes the gains made since the 1950s while scrutinizing the challenges and difficulties which still constrain women's political participation.
AUTHOR BIOGRAPHY
Nikki Craske is a lecturer in politics at Queen's University of Belfast. She has coedited Mexico and the North American Free Trade Agreement: Who Will Benefit? and Dismantling the Mexican State.