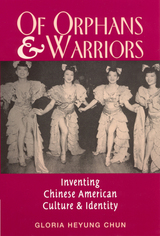 "We were as American as can be," states Jadin Wong in recalling the days when she used to dance at a San Francisco nightclub during the 1940s. Wong belonged to an all-Chinese chorus line at a time when all East Asians were called "Orientals." In this context, then, what did it mean for Wong, an American-born Chinese, to say that she thought of herself as an "American"? Of Orphans and Warriors explores the social and cultural history of largely urban, American-born Chinese from the 1930s through the 1990s, focusing primarily on those living in California. Chun thus opens a window onto the ways in which these Americans born of Chinese ancestry negotiated their identity over a half century.

Past scholarship has portrayed these individuals as desiring to assimilate into mainstream American culture, but being prevented from doing so by the immigrant parent generation. Taking a new approach, Chun uses memoirs, autobiographies, and fictional writings to unravel complex issues of ethnic identity as both culturally defined and individually negotiated. She concludes that, while indeed many Chinese Americans were caught between the lures of mainstream American culture and their parents' old-world values, this liminal position offered them unprecedented opportunities to carve out new identities for themselves from a position of strength.