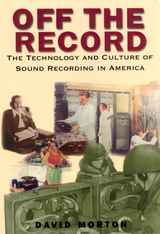 David L. Morton examines the process of invention, innovation, and diffusion of communications technology, using the history of sound recording as the focus. Off the Record demonstrates how the history of both the hardware and the ways people used it is essential for understanding why any particular technology became a fixture in everyday life or faded into obscurity. Morton’s approach to the topic differs from most previous works, which have examined the technology’s social impact, but not the reasons for its existence. Recording culture in America emerged, Morton writes, not through the dictates of the technology itself but in complex ways that were contingent upon the actions of users.

Each of the case studies in the book emphasizes one of five aspects of the culture of recording and its relationship to new technology, at the same time telling the story of sound recording history. One of the misconceptions that Morton hopes to dispel is that the only important category of sound recording involves music. Unique in his broad-based approach to sound technology, the five case studies that Morton investigates are :      Readers will learn, for example, that the equipment to create the telephone answering machine has been around for a century, but that the ownership and use of answering machines was a hotly contested issue in the telephone industry at the turn of the century, hence stifling its commercial development for decades. Morton also offers fascinating insight into early radio: that, while The Amos and Andy Show initially was pre-recorded and not broadcast live, the commercial stations saw this easily distributed program as an economic threat: many non-network stations could buy the disks for easy, relatively inexpensive replaying. As a result, Amos and Andy was sold to Mutual and went live shortly afterward.
AUTHOR BIOGRAPHY
DAVID MORTON is research historian for the IEEE History Center at Rutgers University.