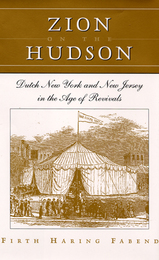 The Dutch came to the New World in the seventeenth century as explorers and traders, but religion soon followed, for it was accepted in the Netherlands that state and church were mutually benefited by advancing the “true Christian religion.” The influence of “Dutchness”—defined here as loyalty to what are presumed to be the distinctive qualities of Dutch national character and culture—persisted in New York and New Jersey for more than 200 years after Dutch emigration ended. Why?

Firth Haring Fabend finds the explanation in the devotion of the Reformed Dutch Church membership to the doctrines and traditions of their church. She looks at the individual and personal beliefs and behaviors of this often-neglected ethnic group. Thus, Zion on the Hudson presents both a broad and an intimate look at the way one mainstream Protestant denomination dealt with the transformative events of the evangelical era.

As Fabend describes the efforts of the Dutch to preserve the European standards and traditions of their church, while developing a taste for a new kind of theology and a preference for an American identity, she documents how Dutchness finally became a historical memory. The Americanization of the Reformed Dutch Church, Fabend writes, is a microcosm of the story of the Americanization of the United States itself.

AUTHOR BIOGRAPHY
Firth Haring Fabend is the author of A Dutch Family in the Middle Colonies, 1660-1800 (Rutgers University Press), winner of the New York State Historical Association Annual Book Award and the Hendricks Prize of the New Netherland Project