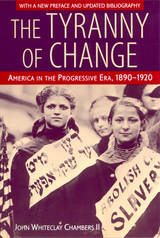 Between 1890 and 1920, the forces accompanying industrialization sent the familiar nineteenth-century world plummeting toward extinction. The traditional countryside with its villages and family farms was eclipsed by giant corporations and sprawling cities. America appeared headed into an unknown future.

In lively, accessible prose, John Chambers incorporates the latest scholarship about the social, cultural, political, and economic changes which produced modern America. He illuminates the experiences of blacks, Asians, Latinos, as well as other working men and women in the cities and countryside as they struggled to improve their lives in a transformed economy. He explores the dimensions of the new consumer society and the new information and entertainment industries: newspapers, magazines, the movies. Striding these pages are many of the prominent individuals who shaped the attitudes and institutions of modern America: J. P. Morgan and corporate reorganization; Jane Addams and the origin of modern social work; Mary Pickford and the new star-oriented motion picture industry; and the radical labor challenge of “Big Bill” Haywood and the “Wobblies.”

While recognizing a “progressive ethos”—a mixture of idealistic vision and pragmatic reforms—which dominated the mainstream reforms that characterized the period, Chambers elaborates the role of civic volunteerism as well as the state in achieving directed social change. He also emphasizes the importance of radical and conservative political forces in shaping the so-called “Progressive Era.”

The revised edition in this classic work has an updated bibliography and a new preface, both of which incorporate particularly the new social and cultural research of the past decade.

AUTHOR BIOGRAPHY
John Whiteclay Chambers II is professor of history at Rutgers University. He recently co-edited The New Conscientious Objection and is the author of To Raise an Army: The Draft Comes to Modern America