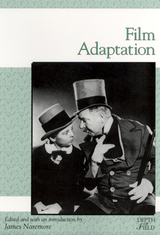 Some of the earliest feature films were derived from classic literature. Even today, most of the movies we see are adaptations of one kind or another. People who have never read Jane Austen can see her characters on the screen; but filmgoers can also see material taken from theater, television, comic books, and every other medium.

The essays in this volume, most of which have never before been published, raise fundamental questions about cinema and adaptation: what is the nature of the "literary" and the "cinematic"? Why do so many of the

films described as adaptions seem to derive from canonical literature rather than from other sources? How do the different media affect the ways stories are told?

Film Adaptation offers fresh approaches to the art, theory, and cultural politics of movie adaptations, even challenging what is meant by the term "adaptation" itself. Contributors examine the process of adaptation in both theory and practice, discussing a wide variety of films. James Naremore's introduction provides an accessible historical overview of the field and reveals the importance of adaptation study to the many different academic disciplines now attracted to the analysis of film as commodity, document, and cultural artifact.

AUTHOR BIOGRAPHY
James Naremore is Chancellors' Professor of Communication and Culture at Indiana University. He has edited North by Northwest (Rutgers University Press), and is the author of The Magic World of Orson Welles, Acting in the Cinema, and More than Night: Film Noir in its Contexts.
REVIEWS
"Naremore's provocative collection breaks new ground in both theoretical and practical studies. . . . The work of informed, thoughtful writers, virtually all the essays are useful reading; combined they convey the crucial, indeed central, importance of adaptation as a critical theoretical category in film studies. Recommended for all collections."
— Choice