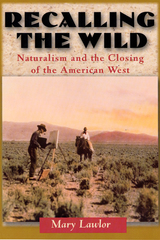 Ever since the first interactions between Europeans and Native Americans, the “West” has served as a site of complex geographical, social and cultural transformation. American literature is defined, in part, by the central symbols derived from these points of contact. By the end of the nineteenth century, the Western frontier was declared “closed,” a demise solidified by Frederick Jackson Turner’s influential essay “The Significance of the Frontier in American History (1893). At the same time, “naturalism” was popularized by the writings of Frank Norris, Stephen Crane, Jack London, Willa Cather, and the photographs of Edward Curtis. Though very different artists, they were united by their common attraction to the mythic American West.

As she investigates the interactions of representations of the West, Lawlor effortlessly melds literary studies, American studies, and history. She traces the cultural conception of the American West through its incarnations in the “westernism” of Daniel Boone and James Fenimore Cooper and the romanticism of the expansive frontier they helped formulate. Simultaneously, however, the influence of evolutionism and the styles of French naturalism began to challenge this romantic idiom. This naturalistic discourse constructed the West as a strictly material place, picturing a limited and often limiting geography that portrayed regional identity as the product of material “forces” rather than of individualistic enterprise.

With subtle, probing language, Lawlor explains how literary and artistic devices helped shape the idea of the American West and the changing landscape of the continent at the turn of the last century.