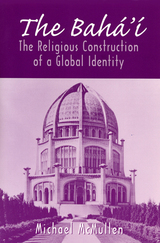 The Bahá’í Faith is one of the fastest growing, but least studied, of the world’s religions. Adherents view themselves as united by a universal belief that transcends national boundaries. Michael McMullen examines how the Bahá’í develop and maintain this global identity. Taking the Bahá’í community in Atlanta, Georgia, as a case in point, his book is the first to comprehensively examine the tenets of this little-understood faith.

McMullen notes that, to the Bahá’í, Buddha, Moses, Jesus, and Mohammed are all divinely sent teachers of ‘the Truth’, whose messages conform to the needs of their individual cultures and historical periods. But religion—which draws from the teaching of Bahá’u’lláh, a nineteenth-century Persian—encourages its members to think of themselves as global citizens. It also seeks to establish unity among its members through adherence to a Bahá’í worldview.

By examining the Atlanta Bahá’í community, McMullen shows how this global identity is interpreted locally. He discusses such topics as: the organizational structure and authority relations in the Bahá’í “Administrative Order”; Bahá’í evangelicalism; and the social boundaries between Bahá’ís and the wider culture.

Michael McMullen is an assistant professor of sociology at the University of Houston, Clear Lake.