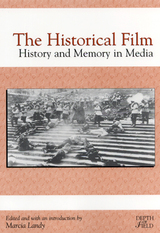 What is history? How do we represent it? How do our notions of history change over time? The essays in The Historical Film: History and Memory in Media probe the roles that cinema and television play in altering and complicating our understanding of historical events.

The book brings together representative examples of how both media critics and historians write about history as it is created and disseminated through film and television. The essays explore what is at stake culturally and politically in media history and how this form of history-making is different from traditional historiography. The volume is divided into four parts--Regarding History; History as Trauma; History, Fiction, and Postcolonial Memory; and History and Television--that progressively deepen our understanding of just how complex the issues are. Essays by top scholars analyze many different kinds of film: historical film, documentary, costume drama, and heritage films. The section on television is equally broad, examining phenomena as diverse as news broadcasts and Ken Burns's documentary The Civil War.

AUTHOR BIOGRAPHY
Marcia Landy is Distinguished Service Professor of English and film studies at the University of Pittsburgh. She is the author of many books, including The Folklore of Consensus: Theatricality and Spectacle in Italian Cinema, 1929-1943.