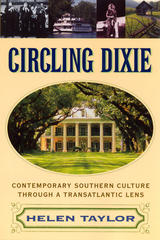 For Europeans looking across the Atlantic, American culture is often the site of desire, fascination, and envy. In Britain, the rich culture of the American South has made a particularly strong impact. Helen Taylor explores the ways in which contemporary Southern culture has been enthusiastically produced and reproduced in a British context.

Taylor examines some of the South's most significant cultural exports in discussions that range across literature, music, film, television, theater, advertising, and tourism to focus on how and why Southern themes and icons have become so deeply embedded in British cultural life. The enduring legacy of Margaret Mitchell's Gone With the Wind can be seen today in the popularity of sequels, revisions, and reworkings of the novel. The conversation between these cultures is further explored in British responses to Alex Haley's Roots, the British theater's special affection for Tennessee Williams's plays, and the marketing of New Orleans as a preferred destination for European tourists. The transformation of Southern culture--itself a hybrid of the European, African, and American--as it circulates back across the Atlantic suggests not only new views of the history, racial politics, music and art of both Britain and the American South, but also an enhanced understanding of the dynamic flow of culture itself.
AUTHOR BIOGRAPHY
HELEN TAYLOR is a professor and head of the School of English at the University of Exeter. She is the author of Scarlett's Women (Rutgers University Press), and coeditor of Dixie Debates.