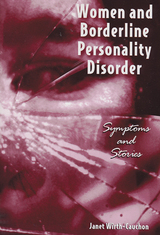 At the beginning of the twentieth century, “hysteria” was a medical or psychiatric diagnosis applied primarily to women. In fact, the term itself comes from the Greek, meaning “wandering womb.” We have since learned, however, that this diagnosis evolved from certain assumptions about women’s social roles and mental characteristics, and is no longer in use.

The modern equivalent of hysteria, however, may be borderline personality disorder, defined as “a pervasive pattern of instability of self-image, interpersonal relationships, and mood, beginning in early adulthood and present in a variety of contexts.” This diagnosis is applied to women so much more often than to men that feminists have begun to raise important questions about the social, cultural, and even the medical assumptions underlying this “illness.” Women are said to be “unstable” when they may be trying to reconcile often contradictory and conflicting social expectations.

In Women and Borderline Personality Disorder, Janet Wirth-Cauchon presents a feminist cultural analysis of the notions of “unstable” selfhood found in case narratives of women diagnosed with borderline personality disorder. This exploration of contemporary post-Freudian psychoanalytic notions of the self as they apply to women’s identity conflicts is an important contribution to the literature on social constructions of mental illness in women and feminist critiques of psychiatry in general.

AUTHOR BIOGRAPHY
Janet Wirth- Cauchon is an associate professor of sociology atDrake University, where she teaches courses in sociology and women’s studies.