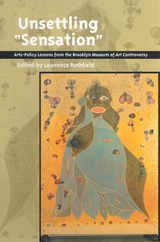 In September 1999, Sensation, an exhibition at the Brooklyn Museum, opened its doors, igniting a controversy still burning in the art world. This collection of cutting-edge art from the Saatchi collection in England, and the museum’s arrangements with Charles Saatchi to finance the show, so offended New York City mayor Rudolph Giuliani that he attempted to shut the museum down by withholding city funds that are crucially needed by that institution. Only a legal ruling prevented him from doing so. Like the Robert Mapplethorpe exhibition before it, Sensation once again raises questions about public spending for “controversial” art, but with the added dimension of religious conflict and charges of commercialization.

The contributors to this volume use the Sensation exhibition as a stepping-stone to analyze larger questions such as the authority the government has to withhold funds, various interpretations of the First Amendment, how to respect divergent cultural and religious values; and the economic stake of museums and dealers in art. In their articles—written expressly for this volume, and spanning the disciplines of law, cultural studies, public policy, and art—the contributors consider issues at the center of arts policy. They propose various legal strategies, curatorial practices, and standards of doing business intended to serve the public interest in the arts.

AUTHOR BIOGRAPHY
Lawrence Rothfield is an associate professor of English and comparative literature and director of the Cultural Policy Program at the University of Chicago.