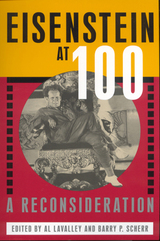 Like many other figures once closely associated with the Soviet state, the great Russian filmmaker Sergei Eisenstein has become the subject of renewed interest. A decade after the fall of the Soviet Union, and with fresh material on his life and art now available, a more complex picture of Eisenstein is emerging. This collection-featuring the work of major film theorists and Russian scholars-offers the first post-Soviet reconsideration of Eisenstein's contribution to world cinema.

The contributors address themes previously avoided by Soviet critics, such as sexuality, religion, gender, and politics, in The Battleship Potemkin, October, Alexander Nevsky, and Ivan the Terrible. These films and others are also reassessed in light of a more thorough knowledge of Eisenstein’s life and of the complicated historical, cultural, and political contexts in which he worked. Of particular concern here is Eisenstein’s struggle with Soviet censorship, which resulted in a tenuous balance between the pressures of the state and his goals as an artist. Essays explore the manner in which Eisenstein’s later theoretical writings reveal continuity with the more well known earlier work, issues of historical revisionism, and the relationship between autobiography and the films. Eisenstein’s undeniable influence on his contemporaries and subsequent generations, as well as his reception by the film community and the public, are illuminated.

REVIEWS
This collection of nineteen essays about the work of Soviet film director Sergei Eisenstein aims to cast the iconic artist in a new light. . . . LaValley and Scherr have collected a wide range of essays, covering topics from the impact of the Orthodox Church on the directorÆs work to the influence Eisenstein had on British directors. . . . Will be of use to academic libraries with a film studies collection and to large public libraries.
— Library Journal