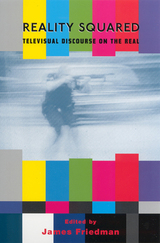 “Reality Squared develops the scholarly discussion of the aesthetic of realism, documentary conventions, and modes of television broadcasting, in sophisticated new directions.  Friedman’s historical perspective is especially valuable since so much discussion of the new aesthetic of realism on television fails to take into account similar trends throughout television history.”—Ellen Seiter, professor of communication, University of California at San Diego

“Reality Squared offers a rich variety of insights into the way television and new media make us believe in the worlds they represent. Spanning across the decades of early live TV to contemporary digital culture, this volume is an important history, not only of media but alsoof our perception of reality itself.”—Lynn Spigel, University of Southern California and author of Welcome to the Dreamhouse

Through the 1980s and 1990s, the television industry and its critics have identified and promoted the re-emergence of “reality-based” television. During the past two decades, this type of programming has come to play a major role in both production decisions and network strategy. At the beginning of the twenty-first century, viewers’ desire for “reality TV” shows no signs of diminishing, as evidenced by the meteoric rise of shows such as Who Wants to be a Millionaire, Survivor, and MTV’s Real World.

Although debates concerning the relationship between representational media and reality have occupied scholars and artists for quite some time, a surprisingly small number of books have examined this subject. As the title suggests, Reality Squared examines the representation of reality within the squared televisual viewing frame, as

well as the exponential growth of these representational programs on broadcast, cable TV, and even beyond, to the worldwide web. The contributors approach the issues surrounding television and reality from a wide range of theoretical and methodological perspectives. Topics include: the internet, the impact of global news events, weather predictions on the Weather Channel, and the representation of criminality on America’s

Most Wanted. This diverse volume contributes to the ongoing conversation about reality and representation, history and fiction, text and context, and the “inside” and “outside” of that box we call television.