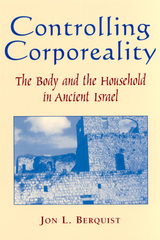 Human bodily existence is at the core of the Torah and the rest of the Hebrew Scriptures—from birth to death. From God’s creation of Adam out of clay, to the narratives of priests and kings whose regulations governed bodily practices, the Hebrew Bible focuses on the human body. Moreover, ancient Israel’s understanding of the human body has greatly influenced both Judaism and Christianity. Despite this pervasive influence, ancient Israel’s view of the human body has rarely been studied and, until now, has been poorly understood.

In this beautifully written book, Jon L. Berquist guides the reader through the Hebrew Bible, examining ancient Israel’s ideas of the body, the unstable roles of gender, the deployment of sexuality, and the cultural practices of the time. Conducting his analysis with reference to contemporary theories of the body, power, and social control, Berquist offers not only a description and clarification of ancient Israelite views of the body, but also an analysis of how these views belong to the complex logic of ancient social meanings. When this logic is understood, the familiar Bible becomes strange and opens itself to a wide range of new interpretations.

AUTHOR BIOGRAPHY
Jon L. Berquist is academic editor at Chalice Press and the author of numerous books, including Judaism in Persia's Shadow: A Social and Historical Approach and Incarnation.