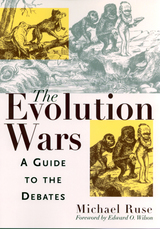 The Evolution Wars draws on history, science, and philosophy to examine the development of evolutionary thought through the past two and a half centuries. It focuses on the debates that have engaged, divided, and ultimately provoked scientists to ponder the origins of organisms—including humankind—paying regard to the nineteenth-century clash over the nature of classification and debates about the fossil record, genetics, and human nature. Much attention is paid to external factors and the underlying motives of scientists.

In these pages you will meet Charles Darwin’s ebullient grandfather Erasmus, the contentious Frenchmen Georges Cuvier and Etienne Geoffroy Stain-Hillaire, new creationist Phillip Johnson, the brilliant J. B. S. Haldane, outspoken Richard Dawkins, and many other stars of the debates.

The Evolution Wars explores the ten greatest controversies surrounding evolution in world history, with emphasis on recent times, including the infamous Scopes trial of the 1920s: the search for human origins and speculation about the “missing link,” spurred by the discovery of “Lucy;” the debate surrounding the new theory of paleontology proposed by Stephen Jay Gould; and the rise of teaching “creation science” in public school as a subject on par with evolution.

Although the author takes a strong stand on the side of evolution, he also shows respect for dissenting viewpoints. Thus, the book is intellectually rewarding not only for evolutionists but also for opponents of evolution theory, especially those who want to see how one of the great ideas of Western civilization resonates through time, both within and beyond the scientific community.