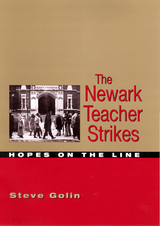 Winner of the Richard P. McCormick 2003 Prize for Scholarly Publication, given by the New Jersey Historical Commission

For three weeks in 1970 and for eleven weeks in 1971, the schools in Newark, New Jersey, were paralyzed as the teachers went on strike. In the wake of the 1971 strike, almost two hundred were arrested and jailed. The Newark Teachers Union said their members wanted improved education for students. The Board of Education claimed the teachers primarily desired more money. After interviewing more than fifty teachers who were on the front lines during these strikes, historian Steve Golin concludes that another, equally important agenda was on the table, and has been ignored until now. These professionals wanted power, to be allowed a voice in the educational agenda.

Through these oral histories, Golin examines the hopes of the teachers as they picketed, risking arrest and imprisonment. Why did they strike? How did the union represent them? How did their action—and incarceration—change them? Did they continue to teach in impoverished schools? Golin also discusses the tensions arising during that period. These include differences in attitudes toward unions among black, Jewish, and Italian teachers; different organizing strategies of men and women; and conflict between teachers’ professional and working-class identities.

The first part of the book sets the stage by exploring the experience of teachers in Newark from World War II to the 1970 strike. After covering both strikes, Golin brings the story up to 1995 in the epilogue, which traces the connection between educational reform and union democracy. Teacher Power enhances our understanding of what has worked and what hasn’t worked in attempts at reforming urban schools. Equally importantly, the teachers’ vivid words and the author’s perceptive analysis enables us to view the struggles of not just Newark, but the entire United States during a turbulent time.

AUTHOR BIOGRAPHY
STEVE GOLIN is a professor of history at Bloomfield College, New Jersey. He is the author of The Fragile Bridge: The Paterson Silk Strike, 1913 , which won the 1990 Richard P. McCormick Prize of the New Jersey Historical Commission.
REVIEWS
Drawing on primary and secondary sources as well as extensive oral interviews with participants in the events, Steve Golin's fine book describes the formation of the Newark Teachers Union and its heart-breaking confrontation with black nationalism and African American parents. He tells an engrossing story that is simultaneously respectful to the activists whose struggle he documents, supportive of their aspirations to be treated with dignity as workers, and critical of the ideological limitations that led to the violent strike and battle with black parents.
— Choice

One of the most interesting studies yet of the public employee union movement that arose in the US during the 1960Æs, this book provides an enlightening account of the tumultuous rise and subsequent decline of the Newark Teachers Union (NTU) . . . this book provides a unique window into the class and race politics that shaped the urban US coming out of the 1960Æs . . . highly recommended.
— Choice

TABLE OF CONTENTS
Contents
Acknowledgments
Introduction
Chapter 1: The Teacher Activists
Chapter 2: After the Riot / Rebellion
Chapter 3: The 1970 Strike
Chapter 4: Black Power Between the Strikes
Chapter 5: The 1971 Strike
Chapter 6: Teachers in Jail
Epilogue: Power to the People?
Appendix: Teachers in the Book
Notes
Index
About the Author