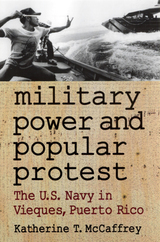 Residents of Vieques, a small island just off the east coast of Puerto Rico, live wedged between an ammunition depot and live bombing range for the U.S. Navy. Since the 1940s when the navy expropriated over two-thirds of the island, residents have struggled to make a life amid the thundering of bombs and rumbling of weaponry fire. Like the armys base in Okinawa, Japan, the facility has drawn vociferous protests from residents who challenged U.S. security interests overseas. In 1999, when a local civilian employee of the base was killed by a stray bomb, Vieques again erupted in protests that have mobilized tens of thousands individuals and transformed this tiny Caribbean Island into the setting for an international cause célèbre.

Katherine T. McCaffrey gives a complete analysis of the troubled relationship between the U.S. Navy and island residents. She explores such topics as the history of U.S. naval involvement in Vieques; a grassroots mobilizationled by fishermenthat began in the 1970s; how the navy promised to improve the lives of the island residentsand failed; and the present-day emergence of a revitalized political activism that has effectively challenged naval hegemony.

The case of Vieques brings to the fore a major concern within U.S. foreign policy that extends well beyond Puerto Rico: military bases overseas act as lightning rods for anti-American sentiment, thus threatening this countrys image and interests abroad. By analyzing this particular, conflicted relationship, the book also explores important lessons about colonialism and postcolonialism and the relationship of the United States to the countries in which it maintains military bases.