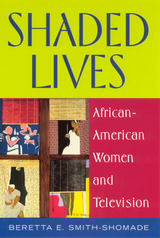 Since its invention, television has been one of the biggest influences on American culture. Through this medium, multiple visions and disparate voices have attempted to stake a place in viewer consumption. Yet even as this programming supposedly reflects characteristics of the general American populace, television-generated images are manipulated and contradictory, predicated by the various economic, political, and cultural forces placed upon it.

In Shaded Lives, Beretta Smith-Shomade sets out to dissect images of the African American woman in television from the 1980s. She calls their depiction "binaristic," or split. African American women, although an essential part of television programming today, are still presented as distorted and deviant. By closely examining the television texts of African-American women in comedy, music video, television news and talk shows (Oprah Winfrey is highlighted), Smith-Shomade shows how these voices are represented, what forces may be at work in influencing these images, and what alternate ways of viewing might be available.

Smith-Shomade offers critical examples of where the sexist and racist legacy of this country collide with the cultural strength of Black women in visual and real-lived culture. As the nation's climate of heightened racial divisiveness continues to relegate the representation of Black women to depravity and display, her study is not only useful, it is critical.