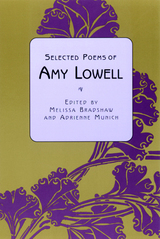 Amy Lowell (1874–1925), American poet and critic, was one of the most influential and best-known writers of her era. Within a thirteen-year period, she produced six volumes of poetry, two volumes of criticism, a two-volume biography of John Keats, and countless articles and reviews that appeared in many popular periodicals. As a herald of the New Poetry, Lowell saw herself and her kind of work as a part of a newly forged, diverse, American people that registered its consciousness in different tonalities but all in a native idiom. She helped build the road leading to the later works of Allen Ginsberg, May Sarton, Sylvia Plath, and beyond. Except for the few poems that invariably appear in American literature anthologies, most of her writings are out of print. This will be the first volume of her work to appear in decades, and the depth, range, and surprising sensuality of her poems will be a revelation.

The poetry is organized according to Lowell’s characteristic forms, from traditional to experimental. In each section the works appear in chronological order. Section one contains sonnets and other traditional verse forms. The next section covers her translations and adaptations of Chinese and Japanese poetry, whereby she beautifully renders the spirit of these works. Also included here are several of Lowell’s own Asian-influenced poems. Lowell’s free, or cadenced verse appears in the third part. The last section provides samples of Lowell’s polyphonic prose, an ambitious and vigorous art form that employs all of the resources of poetry.

Melissa Bradshaw is an assistant professor of interdisciplinary humanities at Barat College of DePaul University.

Adrienne Munich is a professor of English and womens studies at SUNY Stony Brook. She is the author of Queen Victorias Secrets and Andromedas Chains: Gender and Interpretation in Victorian Literature and Art and coeditor of Arms and the Woman and Remaking Queen Victoria.