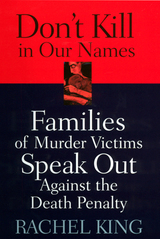 Could you forgive the murderer of your husband? Your mother? Your son?

Families of murder victims are often ardent and very public supporters of the death penalty. But the people whose stories appear in this book have chosen instead to forgive their loved ones’ murderers, and many have developed personal relationships with the killers and have even worked to save their lives. They have formed a nationwide group, Murder Victims’ Families for Reconciliation (MVFR), to oppose the death penalty.

MVFR members are often treated as either saints or lunatics, but the truth is that they are neither. They are ordinary people who have responded to an extraordinary and devastating tragedy with courage and faith, choosing reconciliation over retribution, healing over hatred. Believing that the death penalty is a form of social violence that only repeats and perpetuates the violence that claimed their loved one’s lives, they hold out the hope of redemption even for those who have committed the most hideous crimes.

Weaving third-person narrative with wrenching first-hand accounts, King presents the stories of ten MVFR members. Each is a heartrending tale of grief, soul searching, and of the challenge to choose forgiveness instead of revenge. These stories, which King sets in the context of the national discussion over the death penalty debate and restorative versus retributive justice, will appeal not only to those who oppose the death penalty, but also to those who strive to understand how people can forgive the seemingly unforgivable.