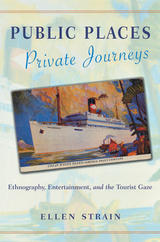 In this globally interconnected planet, we are increasingly able to access exotic locales without ever actually seeing these places firsthand. Instead, what we perceive to be fresh cultural experiences are actually second-hand moments, filtered through mediums such as television, film, the internet, CD-Roms, and various other media.

Ellen Strain posits that the images in film and popular culture not only fill in the gaps of a person’s first-hand—or rather, lack of first-hand—experience with other cultural situations, but also predisposes the “tourist gaze” to view particular locales in a predetermined way. She theorizes the idea of a touristic way of understanding the world in general. How, she asks, are our cross-cultural perceptions of places and peoples created in the first place? Can a set of images—such as postcards—mediate our vision of distant geographies? Are there culturally constructed strategies set up to mediate our cross-cultural perceptions of the exotic? Strain includes the works of Jules Verne, E. M. Forster, and Michael Crichton, as well as film, CD-Rom travel games and virtual reality in her own authorial gaze.

Public Places, Private Journeys is a unique postmodern exploration of how individuals see across cultural differences in an era of increasingly commercialized and globalized culture.