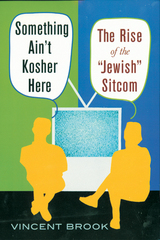 From 1989 through 2002 there was an unprecedented surge in American sitcoms featuring explicitly Jewish lead characters, thirty-two compared to seven in the previous forty years.  Several of these—Mad About You, The Nanny, and Friends—were among the most popular and influential of all shows over this period; one program—Seinfeld—has been singled out as the “defining” series of the nineties.  In addition, scriptwriters have increasingly created “Jewish” characters, although they may not be perceived to be by the show’s audience, Rachel Green on Friends being only one example.

In Something Ain’t Kosher Here, Vincent Brook asks two key questions: Why has this trend appeared at this particular historical moment and what is the significance of this phenomenon for Jews and non-Jews alike?  He takes readers through three key phases of the Jewish sitcom trend: The early years of television before and after the first Jewish sitcom, The Goldbergs’, appeared; the second phase in which America found itself “Under the Sign of Seinfeld”; and the current era of what Brook calls “Post- Jewishness.”

Interviews with key writers, producers, and “showrunners” such as David Kohan, (Will and Grace), Marta Kauffman (Friends and Dream On), Bill Prady (Dharma and Greg), Peter Mehlman and Carol Leifer (Seinfeld), and close readings of individual episodes and series provoke the inescapable conclusion that we have entered uncharted “post-Jewish” territory.  Brook reveals that the acceptance of Jews in mainstream white America at the very time when identity politics have put a premium on celebrating difference reinforces and threatens the historically unique insider/outsider status of Jews in American society. This paradox upsets a delicate balance that has been a defining component of American Jewish identity.

The rise of the Jewish sitcom represents a broader struggle in which American Jews and the TV industry, if not American society as a whole, are increasingly operating at cross-purposes—  torn between the desire to celebrate unique ethnic identities, yet to assimilate: to assert independence, yet also to build a consensus to appeal to the widest possible audience.   No reader of this book will ever be able to watch these television programs in quite the same way again.

AUTHOR BIOGRAPHY
Vincent Brook is an adjunct professor in film and television at California State University and Pierce College in Los Angeles. He has also worked as a film editor and screenwriter and published a number of articles in noted film journals.
REVIEWS
"By offering a savvy and sophisticated history of how television has showcased Jewish characters, Vincent Brook manages to illuminate both the permutations of Jewish status in pop culture and the openness of an inescapable medium to ethnic persistence. As a result, Something Ain't Kosher Here is a compulsively readable book."
— Stephen Whitfield, Dept. of American Studies, Brandeis University