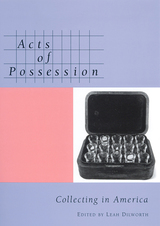 The success of internet auction sites like eBay and the cult status of public television's Antiques Roadshow attest to the continued popularity of collecting in American culture. Acts of Possession investigates the ways cultural meanings of collections have evolved and yet remained surprisingly unchanged throughout American history.

Drawing upon the body of theoretical work on collecting and focusing on individual as opposed to museum collections, the contributors investigate how, what, and why Americans have collected and explore the inherent meanings behind systems of organization and display. Essays consider the meanings of Thomas Jefferson's Indian Hall at Monticello; the pedagogical theories behind nineteenth-century children's curiosity cabinets; collections of Native American artifacts; and the ability of the owners of doll houses to construct meaning within the context of traditional ideals of domesticity.

The authors also consider some darker aspects of collecting-hoarding, fetishism, and compulsive behavior-scrutinizing collections of racist memorabilia and fascist propaganda. The final essay posits the serial killer as a collector, an investigation into the dangerous objectification of humans themselves.

By bringing fresh, interdisciplinary critical perspectives to bear on these questions, Dilworth and her coauthors weave a fascinating cultural history of collecting in America.
AUTHOR BIOGRAPHY
Leah Dilworth is an associate professor of English at Long Island University's Brooklyn campus and the author of Imagining Indians in the Southwest: Persistent Visions of a Primitive Past.
TABLE OF CONTENTS