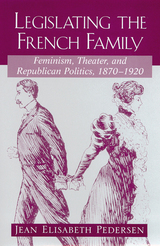 Legislating the French Family examines family law reform in France from the foundation of the Third Republic in 1870 to the aftermath of World War I in 1920. Combining literary and historical approaches, Jean Elisabeth Pedersen provides a unique perspective on the political culture of modern France, analyzing French "problem" plays and their reception both as a measure of public opinion and as a force for social change. This new approach reveals the complex cultural narratives within, against, and in spite of which feminists, journalists, medical experts, playwrights, and politicians contended. Pedersen’s work demonstrates how republican political debates over divorce, illegitimacy, abortion, and birth control both provoked and responded to larger arguments about the meanings of French citizenship, national identity, and imperial expansion. She argues that these debates complicated the idea of French citizenship, exposed the myth of the supposedly ungendered individual citizen, and reveal to us the intricate intersections among conflicts over family law, sexual politics, class structure, religious belief, republican citizenship, national identity, and imperial policy.
AUTHOR BIOGRAPHY
Jean Elisabeth Pedersen is an associate professor of history at the Eastman School of Music, University of Rochester.