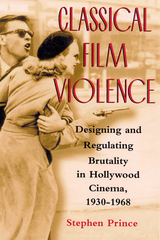 Prince shows that many choices about camera position, editing, and blocking of the action and sound were functional responses by filmmakers to regulatory constraints, necessary for approval from the PCA and then in surviving scrutiny by state and municipal censor boards.

This book is the first stylistic history of American screen violence that is grounded in industry documentation. Using PCA files, Prince traces the negotiations over violence carried out by filmmakers and officials and shows how the outcome left its traces on picture and sound in the films.

Almost everything revealed by this research is contrary to what most have believed about Hollywood and film violence. With chapters such as "Throwing the Extra Punch" and "Cruelty, Sadism, and the Horror Film," this book will become the defining work on classical film violence and its connection to the graphic mayhem of today's movies.
AUTHOR BIOGRAPHY
STEPHEN PRINCE is a professor of communication studies at Virginia Tech. His many books include A New Pot of Gold: Hollywood under the Electronic Rainbow, 1980-1989, Savage Cinema: Sam Peckinpah and the Rise of Ultraviolent Movies, and Screening Violence (Rutgers University Press).
TABLE OF CONTENTS