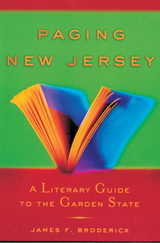 For 300 years, New Jersey writers, books, and historical events have helped shape the cultural landscape of the nation, and yet the state is rarely credited for its numerous contributions to American letters and folklore.  Paging New Jersey is just the book for those interested in uncovering a treasure trove of information about the Garden State’s key role in the creation of U.S. literary and popular culture.  New Jersey writers from Stephen Crane to Toni Morrison are included as well as longtime Camden resident Walt Whitman and Newark native Philip Roth.

James F. Broderick’s unique look at  the state’s literary and cultural history answers intriguing Jersey-related questions such as: how author Peter Benchley got the idea for Jaws; where Aaron Burr shot Alexander Hamilton; why the Hindenberg exploded over Lakehurst in 1937; and where to find help in locating Captain Kidd’s buried treasure along the Jersey Shore.  Most people know that television’s fictional Tony Soprano lives in New Jersey, but what about the state’s other mobsters— The real “goombahs?”  Who are they and what have these particular Jersey devils written?

Full of commentary, biographical information, and history—along with suggested reading lists— Paging New Jersey is a crash course in Jerseyana.  For those who live in the state, expatriots, and yes, even those who think all New Jersey has to offer is the Turnpike, Broderick’s engaging yet learned book provides an entertaining look at the Garden State’s rich cultural heritage.

AUTHOR BIOGRAPHY
JAMES F. BRODERICK is an assistant professor of English and journalism at New Jersey City University in Jersey City, as well as a former newspaper reporter and copyeditor.