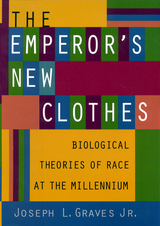 Graves argues that racism has persisted in our society because adequate scientific reasoning has not entered into the equation. He champions the scientific method and explains how we may properly ask scientific questions about the nature of population differentiation and how (if at all) we may correlate that diversity to observed human behavior. He also cautions us to think critically about scientific findings that have historically been misused in controversies over racial differences in intelligence heritability, criminal behavior, disease predisposition, and other traits.

According to Graves, this country cannot truly address its racial problems until people understand the empirical evidence behind this truth that separate human races do not exist. With the biological basis for race removed, racism becomes an ideology, one that can and must be deleted.

AUTHOR BIOGRAPHY
Joseph L. Graves Jr. is the author of The Race Myth. He is University Core Director and professor of biological sciences at Farleigh Dickinson University in Teaneck, New Jersey.