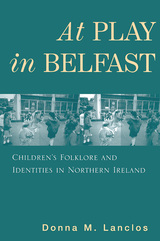 Donna M. Lanclos writes about children on the school playgrounds of working-class Belfast, Northern Ireland, using their own words to show how they shape their social identities. The notion that children's voices and perspectives must be included in a work about childhood is central to the book. Lanclos explores children's folklore, including skipping rhymes, clapping games, and "dirty" jokes, from five Belfast primary schools (two Protestant, two Catholic, and one mixed). She listens for what she can learn about gender, family, adult-child interactions, and Protestant/Catholic tensions. Lanclos frequently notes violent themes in the folklore and conversations that indicate children are aware of the reality in which they live. But at the same time, children resist being marginalized by adults who try to shield them from this reality.

For Lanclos, children's experiences stimulate discussions about culture and society. In her words, "Children's everyday lives are more than just preparation for their futures, but are life itself."

At Play in Belfast is a volume in the Rutgers Series in Childhood Studies, edited by Myra Bluebond-Langner.

AUTHOR BIOGRAPHY
Donna M. Lanclos is an anthropologist and folklorist.