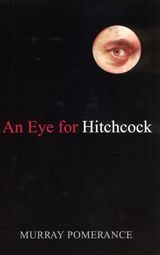 Film scholar Murray Pomerance presents a series of fascinating meditations on six films directed by the legendary Alfred Hitchcock, a master of the cinema. Two of the films are extraordinarily famous and have been seen––and misunderstood––countless times: North by Northwest and Vertigo. Two others, Marnie and Torn Curtain, have been mostly disregarded by viewers and critics or considered to be colossal mistakes, while two others, Spellbound and I Confess, have received almost no critical attention at all.

In An Eye for Hitchcock, these movies are seen in a striking new way. Pomerance takes us deep into the structure of Hitchcock’s vision and his screen architecture, revealing key elements that have never been written about before. Pomerance also clearly reveals the link between Hitchcock’s work and a wide range of thinkers and artists in other fields, thereby offering viewers of Hitchcock’s films the rare opportunity to see them in an entirely new light.