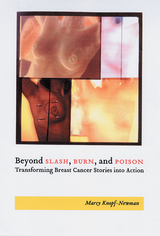 Depending on one’s vantage point, breast cancer can be a very different experience, and indeed, a very different concern.  It is, for some, a personal struggle; for others, it is a disease posing scientific and environmental challenges; and for others it is a highly charged and politicized issue around which policy wars rage. Beyond Slash, Burn, and Poison brings a unique perspective to breast cancer by recognizing the overlapping relationship of all these realities.

Drawing on the writings of Rachel Carson, Betty Ford, Rose Kushner, and Audre Lorde, this book explores the various ways in which patient-centered texts continue to leave their mark on the political realm of breast cancer and, ultimately, the disease itself. Ordered chronologically, the selections trace the progression of discussions about breast cancer from a time when the subject was kept private and silent to when it became part of public discourse. The texts included are personal accounts, written by women struggling to play an active role in their healing process and, at the same time, hoping to help others do the same.

Knopf-Newman also shows us how these writings eventually changed public opinion and the underlying tendency to blame women for their illness. She argues that changes in medical practice and public policy are linked to textual interventions, and makes a case for the politicization of cultural studies of disease through personal and literary expression.

Passionately written and well-researched, Beyond Slash, Burn, and Poison transforms how we think about breast cancer.  Rather than facilitating forums for separate discussions, this book brings conversations into dialog with each other. It is essential reading for anyone concerned with breast cancer and its history, as well as for those interested in the effect of the environment on public health and the role that literature plays in public policy and medicine.

AUTHOR BIOGRAPHY
Marcy Jane Knopf-Newman is an assistant professor of English at Boise State University. She is the editor of The Sleeper Wakes: Harlem Renaissance Stories by Women and Jessie Fauset's The Chinaberry Tree & Selected Writings.
REVIEWS
Beyond Slash, Burn and Poison makes a great contribution to the emerging literature on the breast cancer movement. The facts and framework of this book powerfully demonstrate the ability of women's words to transform society, and point the way to a future in which breast cancer policy reflects the experiences of all women-and men-affected by the disease.
— Barbara Brenner, Executive Director of Breast Cancer Action