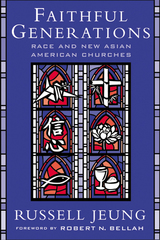 Religion—both personal faith and institutional tradition—plays a central role in the lives of the 12.5 million Asians in the United States. It provides comfort and meaning, shapes ethical and political beliefs, and influences culture and arts. Faithful Generations details the significance of religion in the construction of Asian American identity. As an institutional base for the movement toward Asian American panethnicity, churches provide a space for theological and political reflection and ethnic reinvention.

This engaging study of the shifting relationship between religion and ethnicity is an ideal text for classes in ethnicity, religion, and Asian American studies.

AUTHOR BIOGRAPHY
Russell Jeung is an assistant professor of Asian American studies at San Francisco StateUniversity. He lives in Oakland, California, where he is active in the Asian American community and in church work.
TABLE OF CONTENTS