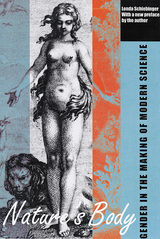 Eighteenth-century natural historians created a peculiar, and peculiarly durable, vision of nature—one that embodied the sexual and racial tensions of that era. When plants were found to reproduce sexually, eighteenth-century botanists ascribed to them passionate relations, polyandrous marriages, and suicidal incest, and accounts of steamy plant sex began to infiltrate the botanical literature of the day. Naturalists also turned their attention to the great apes just becoming known to eighteenth-century Europeans, clothing the females in silk vestments and training them to sip tea with the modest demeanor of English matrons, while imagining the males of the species fully capable of ravishing women.

Written with humor and meticulous detail, Nature’s Body draws on these and other examples to uncover the ways in which assumptions about gender, sex, and race have shaped scientific explanations of nature. Schiebinger offers a rich cultural history of science and a timely and passionate argument that science must be restructured in order to get it right.

AUTHOR BIOGRAPHY
Londa Schiebinger is professor of history of science and the Barbara D. Finberg Director of the Institute for Research on Women and Gender, Stanford University. She is the author of numerous books including, The Mind Has No Sex?, Has Feminism Changed Science?, Feminism and the Body, and Plants and Empire.