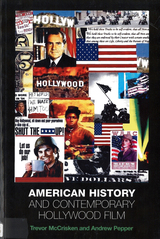 Hollywood has always been fascinated by America's past, but never more so than in the past fifteen years. Bringing exciting new perspectives to how and why Hollywood has sought to repicture American history, this book offers analysis of more than twenty mainstream contemporary films, including The Patriot, Amistad, Glory, Ride with the Devil, Cold Mountain, Saving Private Ryan, TheThin Red Line, Pearl Harbor, U-571, Platoon, Born on the Fourth of July, Heaven and Earth, JFK, Nixon, Malcolm X, Ali, Black Hawk Down, and Three Kings.

Both authoritative and engaging, American History and Contemporary Hollywood Film is the first book to comprehensively explore the post-cold war period of filmmaking, and to navigate the complex ways that film mediates history-sometimes challenging or questioning, but more frequently reaffirming traditional interpretations. The authors consider why such films are becoming increasingly integral to the ambitions of a globally focused American film industry.

Structured by historical periods, chapters cover significant events and eras such as the American Revolution, slavery and the Civil War, World War II, the sixties and seventies, civil rights and black nationalism, the Vietnam War, and post-cold war global conflicts. The lessons learned from the examples will be illuminating for general readers and college students alike.

AUTHOR BIOGRAPHY
TREVOR McCRISKEN is lecturer in American politics and international studies at the University of Warwick. He is the author of American Exceptionalism and the Legacy of Vietnam: US Foreign Policy Since 1974.

ANDREW PEPPER is lecturer in English and American literature at Queen's University, Belfast. He is the author of The Contemporary American Crime Novel.