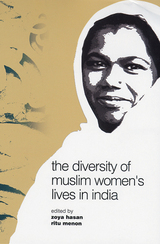 To what extent does Muslim personal law, such as polygamy and triple talaq (the allowance for men to instantly divorce their wives), affect the lives of Muslim women? Are these factors more or less important than other lifestyle issues such as socioeconomic status?

Over the past several decades, the most influential approaches to the study of Muslim women and nearly all the significant campaigns for their rights have focused on religious practices and the urgency to reform Islamic laws. Such focused views, however, give the false sense that religion is the main, if not the only, aspect of Muslim women’s lives.

In order to broaden the lens through which this demographic is typically seen, a group of researchers in India carried out a large and unprecedented study of one of the most disadvantaged sections of Indian society. The editors of The Diversity of Muslim Women’s Lives in India bring together this research in a comprehensive collection of informative and revealing case studies. The essays examine Muslim identity, not only in terms of religious doctrine, but as a heterogeneous set of characteristics produced at the intersections of class, religion, and gender.

Addressing issues of law, politics, education, race, and other neglected secular subjects, this volume is essential reading for policy-makers, social activists, and scholars.

Zoya Hasan is a professor at the Centre for Political Studies, Jawaharlal Nehru University, New Delhi. She has published widely in academic journals and periodicals and is the author of Dominance and Mobilisation: Rural Politics in Western Uttar Pradesh and Quest for Power: Oppositional Movements and Post-Congress Politics in Uttar Pradesh. With Ritu Menon, she is coauthor of Unequal Citizens: A Study of Muslim Women in India.

Ritu Menon is a publisher and writer. She is the coauthor of Borders and Boundaries: Women in India’s Partition and Unequal Citizens: A Study of Muslim Women in India, and editor of No Woman’s Land: Women from Pakistan, India and Bangladesh Write on the Partition of India. She has also edited several anthologies of stories by Indian women.