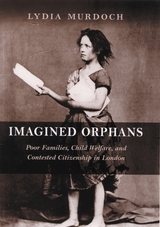 With his dirty, tattered clothes and hollowed-out face, Oliver Twist is the enduring symbol of the young indigent spilling out of orphanages and haunting the streets of late-nineteenth-century London. Although poor children were often portrayed as real-life Oliver Twists—either orphaned or abandoned by unworthy parents—they in fact frequently maintained contact and were eventually reunited with their families.

In Imagined Orphans, Lydia Murdoch focuses on this discrepancy between the representation and the reality of children’s experiences within welfare institutions—a discrepancy that she argues stems from conflicts over middle- and working-class notions of citizenship that arose in the 1870s and persisted until the First World War. Reformers’ efforts to depict poor children as either orphaned or endangered by abusive or “no-good” parents fed upon the poor’s increasing exclusion from the Victorian social body. Reformers used the public’s growing distrust and pitiless attitude toward poor adults to increase charity and state aid to the children.

With a critical eye to social issues of the period, Murdoch urges readers to reconsider the complex situations of families living in poverty. While reformers’ motivations seem well intentioned, she shows how their methods solidified the public’s antipoor sentiment and justified a minimalist welfare state that engendered a cycle of poverty. As they worked to fashion model citizens, reformers’ efforts to protect and care for children took on an increasingly imperial cast that would continue into the twentieth century.