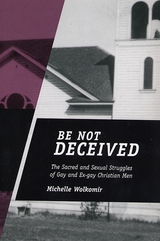 Homosexuality has become increasingly accepted in mainstream America over the past two decades. Yet despite indications of progress that can be found everywhere from academia to popular culture, gay men and women remain the target of much discrimination and stigma, particularly within conservative Christianity.

In Be Not Deceived, Michelle Wolkomir explores the difficult dilemma that gay Christians face in their attempts to reconcile their religious and sexual identities. She introduces the ideologies and practices of two alternative and competing ministries that offer solutions for Christians who experience homosexual desire.

One organization—the Universal Fellowship of Metropolitan Community Churches—believes that God made people gay to suit divine purposes.  Changing one’s sexuality is therefore impossible and a defiance of God.  In contrast, Exodus International preaches that homosexuality is a sin and a symptom of disordered psychological development—one that can be cured through redemptive prayer.  By comparing participant experiences in these ministries, Wolkomir explores the paths and processes by which members learn to become gay or ex-gay Christians.

Through careful analysis of the groups’ ideologies, interactions, and symbolic resources, Be Not Deceived goes far beyond the obvious differences between the ministries to uncover their similarities, namely that both continue to define heterosexuality as the normative and dominant lifestyle.

Michelle Wolkomir is an assistant professor of sociology at Centenary College in Shreveport, Louisiana.