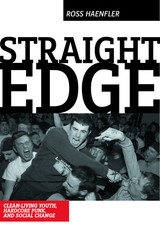 Straight edge is a clean-living youth movement that emerged from the punk rock subculture in the early 1980s. Its basic tenets promote a drug-free, tobacco-free, and sexually responsible lifestyle—tenets that, on the surface, seem counter to those typical of teenage rebellion. For many straight-edge kids, however, being clean and sober was (and still is) the ultimate expression of resistance—resistance to the consumerist and self-indulgent ethos that defines mainstream U.S. culture.

In this first in-depth sociological analysis of the movement, Ross Haenfler follows the lives of dozens of straight-edge youths, showing how for these young men and women, and thousands of others worldwide, the adoption of the straight-edge doctrine as a way to better themselves evolved into a broader mission to improve the world in which they live. Straight edge used to signify a rejection of mind-altering substances and promiscuous sex, yet modern interpretations include a vegetarian (or vegan) diet and an increasing involvement in environmental and political issues.

The narrative moves seamlessly between the author’s personal experiences and theoretical concerns, including how members of subcultures define “resistance,” the role of collective identity in social movements, how young men experience multiple masculinities in their quest to redefine manhood, and how young women establish their roles in subcultures. This book provides fresh perspectives on the meaning of resistance and identity in any subculture.

Ross Haenfler is an assistant professor of sociology at the University of Mississippi.