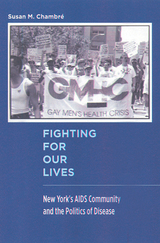 In the first decade of the AIDS epidemic, New York City was struck like no other. By the early nineties, it was struggling with more known cases than the next forty most infected cities, including San Francisco, combined.

Fighting for Our Lives is the first comprehensive social history of New York's AIDS community-a diverse array of people that included not only gay men, but also African Americans, Haitians, Latinos, intravenous drug users, substance abuse professionals, elite supporters, and researchers. Looking back over twenty-five years, Susan Chambré focuses on the ways that these disparate groups formed networks of people and organizations that-both together and separately-supported persons with AIDS, reduced transmission, funded research, and in the process, gave a face to an epidemic that for many years, whether because of indifference, homophobia, or inefficiency, received little attention from government or health care professionals.

Beyond the limits of New York City, and even AIDS, this case study also shows how any epidemic provides a context for observing how societies respond to events that expose the inadequacies of their existing social and institutional arrangements. By drawing attention to the major faults of New York's (and America's) response to a major social and health crisis at the end of the twentieth century, the book urges more effective and sensitive actions-both governmental and civil-in the future.

AUTHOR BIOGRAPHY
Susan M. Chambré is a professor of sociology at Baruch College of the City University of New York and the author of Good Deeds in Old Age.
REVIEWS
"Fighting for Our Lives is an invaluable history of the struggle by citizen groups for more sensible and humane AIDS policies. Anyone who wants to know something of the politics of AIDS should read this book. It's exhaustively researched and the result is that we have an authoritative history of an important period in the evolution of the disease."
— Jeffrey M. Berry, author of A Voice for Nonprofits