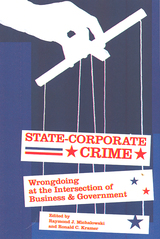 Winner of the 2006 Division of Critical Criminology Lifetime Achievement Award

Enron, Haliburton, ExxonValdez, "shock and awe"-their mere mention brings forth images of scandal, collusion, fraud, and human and environmental destruction. While great power and great crimes have always been linked, media exposure in recent decades has brought increased attention to the devious exploits of economic and political elites.

Despite growing attention to crimes by those in positions of trust, however, violations in business and similar wrongdoing in government are still often treated as fundamentally separate problems. In State-Corporate Crime, Raymond J. Michalowski and Ronald C. Kramer bring together fifteen essays to show that those in positions of political and economic power frequently operate in collaboration, and are often all too willing to sacrifice the well-being of the many for the private profit and political advantage of the few.

Drawing on case studies including the explosion of the space shuttle Challenger, Ford Explorer rollovers, the crash of Valujet flight 592, nuclear weapons production, and war profiteering, the essays bear frank witness to those who have suffered, those who have died, and those who have contributed to the greatest human and environmental devastations of our time. This book is a much needed reminder that the most serious threats to public health, security, and safety are not those petty crimes that appear nightly on local news broadcasts, but rather are those that result from corruption among the wealthiest and most powerful members of society.
AUTHOR BIOGRAPHY

Raymond J. Michalowski is the Arizona Regents Professor at Northern Arizona University.
Ronald C. Kramer is the director of the criminal justice program and a professor of sociology at Western Michigan University.