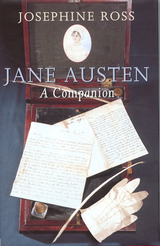 The only best-selling authors in Jane Austen's league in the English language today are Shakespeare and Dickens. In the twenty-first century her boundless appeal continues to grow following the enormously successful television and film adaptations of Mansfield Park, Pride and Prejudice, Emma, Persuasion, and Sense and Sensibility.

This illuminating, entertaining, up-to-date companion is the only general guide to Jane Austen, her work, and her world. Josephine Ross explores the literary scene during the time Austen's works first appeared: the books considered classics then, the "horrid novels" and romances, and the grasping publishers. She looks at the architecture and décor of Austen's era that made up "the profusion and elegance of modern taste." Regency houses for instance, Chippendale furniture, and "picturesque scenery." On a smaller scale she answers questions that may baffle modern readers. What, for example, was "hartshorn"? How did Lizzy Bennet "let down" her gown to hide her muddy petticoat? Ross shows us the fashions, and the subtle ways Jane Austen used clothes to express character. Courtship, marriage, adultery, class and "rank," mundane tasks of ordinary life, all appear, as does the wider political and military world.

This book will add depth to all readers' enjoyment of Jane Austen, whether confirmed addicts or newcomers wanting to learn about one of the world's most popular and enduring writers.
AUTHOR BIOGRAPHY
JOSEPHINEROSS has written books on the British monarchy, history, and on style, including The Monarchy in Britain. She has also worked for Vogue magazine and in television. She lives in London.