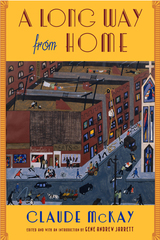 Claude McKay (1889–1948) was one of the most prolific and sophisticated African American writers of the early twentieth century. A Jamaican-born author of poetry, short stories, novels, and nonfiction, McKay has often been associated with the “New Negro” or Harlem Renaissance, a movement of African American art, culture, and intellectualism between World War I and the Great Depression. But his relationship to the movement was complex. Literally absent from Harlem during that period, he devoted most of his time to traveling through Europe, Russia, and Africa during the 1920s and 1930s. His active participation in Communist groups and the radical Left also encouraged certain opinions on race and class that strained his relationship to the Harlem Renaissance and its black intelligentsia. In his 1937 autobiography, A Long Way from Home, McKay explains what it means to be a black “rebel sojourner” and presents one of the first unflattering, yet informative, exposés of the Harlem Renaissance. Reprinted here with a critical introduction by Gene Andrew Jarrett, this book will challenge readers to rethink McKay’s articulation of identity, art, race, and politics and situate these topics in terms of his oeuvre and his literary contemporaries between the world wars.

AUTHOR BIOGRAPHY
Gene Andrew Jarrett is an assistant professor of English at the University of Maryland, College Park, and the author of Deans and Truants: Race and Realism in African American Literature.