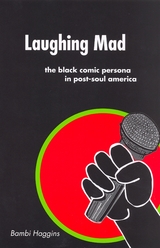 In Laughing Mad , Bambi Haggins looks at how this transition occurred in a variety of media and shows how this integration has paved the way for black comedians and their audiences to affect each other. Historically, African American performers have been able to use comedy as a pedagogic tool, interjecting astute observations about race relations while the audience is laughing. And yet, Haggins makes the convincing argument that the potential of African American comedy remains fundamentally unfulfilled as the performance of blackness continues to be made culturally digestible for mass consumption.

Rather than presenting biographies of individual performers, Haggins focuses on the ways in which the comic persona is constructed and changes across media, from stand-up, to the small screen, to film. She examines the comic televisual and cinematic personae of Dick Gregory, Bill Cosby, Flip Wilson, and Richard Pryor and considers how these figures set the stage for black comedy in the next four decades. She reads Eddie Murphy and Chris Rock as emblematic of the first and second waves of post-civil rights era African American comedy, and she looks at the socio-cultural politics of Whoopi Goldberg's comic persona through the lens of gender and crossover. Laughing Mad also explores how the comedy of Dave Chappelle speaks to and for the post-soul generation.

A rigorous analytic analysis, this book interrogates notions of identity, within both the African American community and mainstream popular culture. Written in engaging and accessible prose, it is also a book that will travel from the seminar room, to the barbershop, to the kitchen table, allowing readers to experience the sketches, stand-up, and film comedies with all the laughter they deserve.