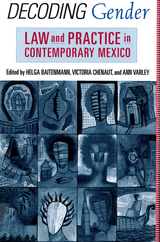 Gender discrimination pervades nearly all legal institutions and practices in Latin America. The deeper question is how this shapes broader relations of power. By examining the relationship between law and gender as it manifests itself in the Mexican legal system, the thirteen essays in this volume show how law is produced by, but also perpetuates, unequal power relations. At the same time, however, authors show how law is often malleable and can provide spaces for negotiation and redress. The contributors (including political scientists, sociologists, geographers, anthropologists, and economists) explore these issues-not only in courts, police stations, and prisons, but also in rural organizations, indigenous communities, and families.

By bringing new interdisciplinary perspectives to issues such as the quality of citizenship and the rule of law in present-day Mexico, this book raises important issues for research on the relationship between law and gender more widely.

AUTHOR BIOGRAPHY
Helga Baitenmann is an associate fellow of the Institute of the Study of the Americas, University of London.

Ann Varley is a reader in Geography at University College London.
TABLE OF CONTENTS