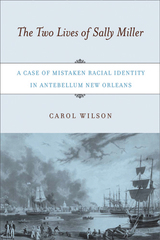 In 1843, the Louisiana Supreme Court heard the case of a slave named Sally Miller, who claimed to have been born a free white person in Germany. Sally, a very light-skinned slave girl working in a New Orleans caf, might not have known she had a case were it not for a woman who recognized her as Salom Muller, with whom she had emigrated from Germany over twenty years earlier. Sally decided to sue for her freedom, and was ultimately freed, despite strong evidence contrary to her claim.

In The Two Lives of Sally Miller, Carol Wilson explores this fascinating legal case and its reflection on broader questions about race, society, and law in the antebellum South. Why did a court system known for its extreme bias against African Americans help to free a woman who was believed by many to be a black slave? Wilson explains that while the notion of white enslavement was shocking, it was easier for society to acknowledge that possibility than the alternative-an African slave who deceived whites and triumphed over the system.

AUTHOR BIOGRAPHY
Carol Wilson is an associate professor of history at Washington College in Chestertown, Maryland.
TABLE OF CONTENTS