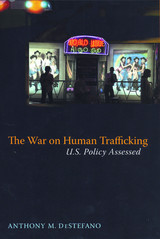 The United States has taken the lead in efforts to end international human trafficking-the movement of peoples from one country to another, usually involving fraud, for the purpose of exploiting their labor. Examples that have captured the headlines include the 300 Chinese immigrants that were smuggled to the United States on the ship Golden Venture and the young Mexican women smuggled by the Cadena family to Florida where they were forced into prostitution and confined in trailers.

The public's understanding of human trafficking is comprised of terrible stories like these, which the media covers in dramatic, but usually short-lived bursts. The more complicated, long-term story of how policy on trafficking has evolved has been largely ignored. In The War on Human Trafficking, Anthony M. DeStefano covers a decade of reporting on the policy battles that have surrounded efforts to abolish such practices, helping readers to understand the forced labor of immigrants as a major global human rights story.

DeStefano details the events leading up to the creation of the Trafficking Victims Protection Act of 2000, the federal law that first addressed the phenomenon of trafficking in persons. He assesses the effectiveness of the 2000 law and its progeny, showing the difficulties encountered by federal prosecutors in building criminal cases against traffickers. The book also describes the tensions created as the Bush Administration tried to use the trafficking laws to attack prostitution and shows how the American response to these criminal activities was impacted by the events of September 11th and the War in Iraq.

Parsing politics from practice, this important book gets beyond sensational stories of sexual servitude to show that human trafficking has a much broader scope and is inextricable from the powerful economic conditions that impel immigrants to put themselves at risk.
AUTHOR BIOGRAPHY
Anthony M. DeStefano is a reporter for Newsday covering New York City legal affairs and criminal justice. Prior to joining Newsday, he was a reporter at The Wall Street Journal. He is an attorney and member of the New York State bar.
TABLE OF CONTENTS