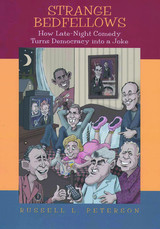 It is no coincidence that presidential candidates have been making it a point to add the late-night comedy circuit to the campaign trail in recent years. In 2004, when John Kerry decided it was time to do his first national television interview, he did not choose CBS’s 60 Minutes, ABC’s Nightline, or NBC Nightly News. Kerry picked Comedy Central’s The Daily Show. When George W. Bush was lagging in the polls, his appearance on the David Letterman Show gave him a measurable boost. Candidates for the 2008 presidential election began their late-night bookings almost as soon as they launched their campaigns.

How can this be? The reason is that polls have been consistently finding that a significant number of Americans—and an even larger proportion of those under the age of thirty—get at least some of their “news” about politics and national affairs from comedy shows. While this trend toward what some have called “infotainment” seems to herald the descent of our national discourse—the triumph of entertainment over substance—the reality, according to Russell L. Peterson, is more complex. He explains that this programming is more than a mere replacement for traditional news outlets; it plays its own role in shaping public perception of government and the political process.

From Johnny Carson to Jon Stewart, from Chevy Chase’s spoofing of President Ford on Saturday Night Live to Stephen Colbert’s roasting of President Bush at the White House Correspondents Dinner, Strange Bedfellows explores what Americans have found so funny about our political institutions and the people who inhabit them, and asks what this says about the health of our democracy. Comparing the mainstream network hosts—Jay, Dave, Conan, and Johnny before them—who have always strived to be “equal opportunity offenders” to the newer, edgier crop of comedians on cable networks, Peterson shows how each brand of satire plays off a different level of Americans’ frustrations with politics.