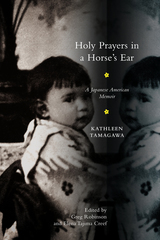 Originally published in 1932, Kathleen Tamagawa’s pioneering Asian American memoir is a sensitive and thoughtful look at the personal and social complexities of growing up racially mixed during the early twentieth century. Born in 1893 to an Irish American mother and a Japanese father and raised in Chicago and Japan, Tamagawa reflects on the difficulty she experienced fitting into either parent’s native culture.

She describes how, in America, her every personal quirk and quality was seen as quintessentially Japanese and how she was met unpredictably with admiration or fear—perceived as a “Japanese doll” or “the yellow menace.” When her family later moved to Japan, she was viewed there as a “Yankee,” and remained an outsider in that country as well. As an adult she came back to the United States as an American diplomat’s wife, but had trouble feeling at home in any place.

This edition, which also includes Tamagawa’s recently rediscovered short story, “A Fit in Japan,” and a critical introduction, will challenge readers to reconsider how complex ethnic identities are negotiated and how feelings of alienation limit human identification in any society.