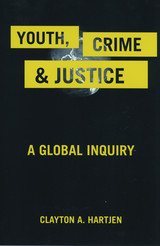 Close to half of the world’s population is below the age of criminal jurisdiction in most countries. Many of these young people are living in poverty and under totalitarian regimes. Given their deprived and often abject circumstances, it is not surprising that many of them become involved in crime.

In Youth, Crime, and Justice, Clayton A. Hartjen provides a broad overview of juvenile delinquency: how it manifests itself around the world and how societies respond to misconduct among their children. Taking a global, rather than country-specific approach, chapters focus on topics that range from juvenile laws and the correction of child offenders to the abuse, exploitation, and victimization of young people. Hartjen includes specific examples from the United States, Australia, Spain, Switzerland, New Zealand, Japan, India, Egypt, and elsewhere as he sorts through the various definitions of “delinquent” and explores the differences in behavior that contribute to these classifications. Most importantly, his in-depth and comparative look at judicial systems worldwide raises questions about how young offenders should be “corrected” and how much fault can be laid on misbehaving youths acting out against the very societies that produced them.

AUTHOR BIOGRAPHY
Clayton A. Hartjen is a professor and chair of the department of sociology and anthropology and a member of the faculty of the Graduate School of Criminal Justice at Rutgers-Newark.
TABLE OF CONTENTS